The observation and monitoring of the state of the ionosphere in the Observatori de l’Ebre began on 26 March 1955, when the first ionospheric sounder in Spain was inaugurated.

The ionosphere is the part of the upper atmosphere, situated roughly between 60 and 1000 Km of height, which is weakly ionised. This means that there are free electrons and positive ions which can move freely. This endows the atmosphere of interesting electrical properties. At middle and low latitudes, i.e., far from the poles, the upper atmosphere is basically ionised by the solar radiation (in the bands of Ultraviolet and X-rays, that are absorbed by the highest layers of the atmosphere). At high latitudes, i.e., near from the poles, the ionisation of the atmosphere is basically due to the corpuscular radiation (particles) transported by the solar wind by effect of the geomagnetic field. This fact makes the ionosphere to behave as an electrical conductor, which is able to modify the propagation of the radioelectric waves, by diverting them from its straight line path. So much so that it can reflect some radio waves, of until some 30 - 40 MHz, which allows the communication between two far places of the Earth, by saving either its curvature or its orography. The ionosphere can also affect significantly the signals sent from the satellites, by causing strong interferences. These reasons, among others, make its knowledge to be important, since it has a lot of applications, both scientific and technical.

Thus, although some theoretical studies was claiming that it could exist a conductive layer in the upper atmosphere, the interest in this region increased after Marconi, in 1901, achieved transmitting radio signals from Cornwall (England) until Newfouland (Canada), with the consistent hypotheses that Kennelly and Heaviside independently formulated. These two researchers claimed that because of the curvature of the Earth, the radio waves had unavoidably been reflected in an ionized layer, the ionosphere.

The observation of the terrestrial ionosphere is based, predominantly, on indirect measurement techniques, by taking advantage of the fact that the electromagnetic waves, in the presence of a magnetic field, are modified during their propagation when they cross an ionized medium.

Basically, at middle latitudes, the vertical structure of the ionosphere shows three regions, which in ascending order are named D, E and F. The D region (at 60-90 Km roughly) is the most complex part of the ionosphere from the chemical point of view. It is highly controlled by solar radiation and it vanishes at night. It is the region which absorbs most of the radio waves, and this the reason why it is easier to listen remote broadcasting stations during the night. The following region is the E region (at 90-120 km approximately), which is also strongly controlled by solar radiation. It reaches its maximum at local noon, and it remains quite weak at night. In certain circumstances it appears a second layer, called sporadic E (Es), which is related with the neutral wind shear. Above these two regions, there is the F region (at 150-1000 Km approximately), which in turn, presents two layers called F1 and F2 layers during daytime, and mainly during the summer. At night time, only the F2 layer remains, which has the greatest concentration of electrons, and in general, thanks to it we can communicate via radio to long distances. 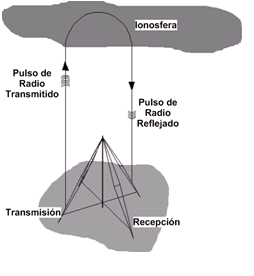 At present, the study of the ionosphere at the Observatori de l’Ebre is done by the use of the well known technique of the vertical ionospheric sounding. This is based, in a summarized form, on the transmission of a radio pulse vertically and on the measurement of the time which elapses before the echo is received. Assuming, at first instance, that the pulse runs at the speed of the light, the virtual height to which the reflection has taken place is calculated. This principle can be recognized as that of the radar, but it should be noted that the radar for aircrafts detection was developed from the techniques of the ionospheric sounding. 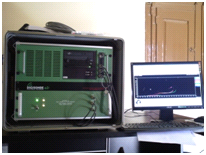 The instrument currently installed at the Observatori de l’Ebre is a DPS-4D ionospheric sounder, which was developed and built by Lowell Digisonde International in collaboration with UMass Lowell Center for Atmospheric Research. Routinely, it performs an ionospheric sounding every 15 minutes, but we are able to modify this cadence during specific campaigns. The instrument has a transmitter antenna, an integrated transceiver package (control unit), and a network of receiver antennas formed by four crossed magnetic dipole antennas. This station, which is singular in the Iberian Peninsula, belongs to the world-wide ionospheric observation network GIRO, and provides information for the products of the European network DIAS.

The system has complementary cards of codifying phase and it benefits of advanced technology of radar in HF, like compression of pulses and coherent integration of phase, which makes it able to be used also as a spectrum analyser in HF. Thus, it allows obtaining the phase of the signal in each one of the four receiver antennas, by each spectral component, and identifying the angle from where the reflected pulses in the ionosphere come from (azimuth and elevation), its polarisation, the Doppler shift, and the time of flight, from the transmission until the reception. 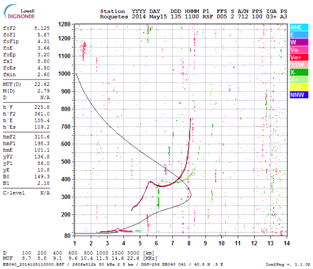 Among the records provided by system, the ionogram is the most classical. The system performs a frequency sweep and it obtains a representation of the sounding frequency in function of the virtual height (time of flight). The virtual height is greater that the real height, due to the fact that the ionosphere behaves as a dispersive medium and radio pulses travel slower than light. Nevertheless, by applying inversion ionogram algorithms it is possible to calculate a profile of the electronic density in real height. Besides, the Total Electron Content (TEC) could be estimated by means of the integration of the electron density profile. 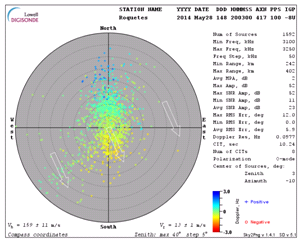 The skymap is another type of record provided by the system. It collects, for both a certain band of frequencies and a certain rank of reflection heights, the angle from where  the reflected pulses in the ionosphere come from (azimuth and elevation), and the Doppler shift. This information indicates the place on the vertical where the radio pulses have been reflected (if the reflective layer is tilted or if it presents irregularities), and if these reflection points move respect to the transmitting source (if the reflective layer is dynamic), providing us the apparent drift speed of the reflective layer. In the ideal case of an ionosphere in calm, it would be expected that all the reflections rebounded on the vertical (centre of the map) with a zero Doppler shift.

From an ionogram, we basically measure the critical frequencies of each layer, the virtual heights, and some parameters of propagation as for example the M(3000)F2, and we are able to derive the electronic density profile in function of the height. We reduce hourly ionograms every dat, and we calculate the day to day variability of the plasma frequency with height. 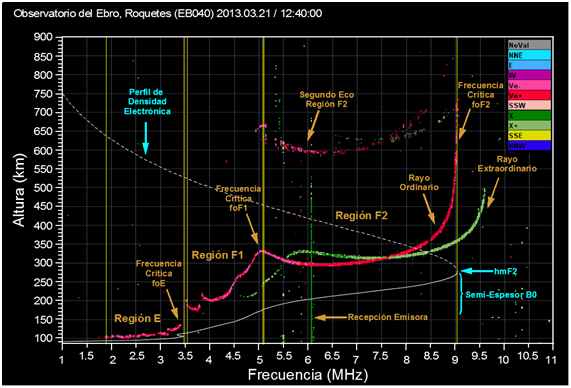 The ionospheric database of the Observatori de l’Ebre contains all digitized ionospheric parameters from the beginning in 1955. Every year, we produce an ionospheric butlletin, which, from the one corresponding to 2004, can be downloaded from our web page. The catalogue of the available data may also be consulted. This large quantity of data, together with data from other observatories, allows us to both analyze and know the state of the ionosphere either on quiet intervals or on disturbed periods due to the effects of the geomagnetic storms in the ionosphere.

In 2004, the Observatori de l’Ebre installed an ionospheric sounder in the Livingston Island, in the Antarctica, in order to study the state of the ionosphere in such remote location. Due to technical requirements of the device, this sounder only operates during the austral summer, when the Spanish Antartic station is open. The instrument is an Advanced Ionspheric Sounder developed by the Italian Istituto Nacionale de Geofisica e Vulcanologia (AIS_IGNV) and provides hourly ionograms that are analysed in the observatory. 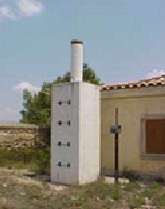 During the history of the ionospheric observation in the Observatori de l’Ebre, other systems, in addition to the ionospheric sounder, have been employed, as for example the A3 absorption method, that served for the study of the D region, and the calculation of the TEC by means of the calculation of the Faraday rotation. At present, the technique for measuring the TEC is based on the analysis of the signals emitted by the constellation of GPS, GLONASS, GALILEO, satellites …, known as GNSS (Global Navigation Satellite Systems). These emit, at least, two frequencies, and it is necessary to have suitable GNSS receivers, with which it is possible to differentiate the two phases associated to the above mentioned frequencies. This allows the determination of the phase delays due to the propagation of the signals through the ionosphere. These delays are proportional, except instrumental terms, to the integrated electronic density in the entire ray path, and enable to obtain the TEC. From 1996, l’Institut Cartogràfic i Geològic de Catalunya maintains an operative GPS receiver in the observatory.