The Cartographic and Geological Institute of Catalonia (ICGC), dependent on the Department of Territory and Sustainability, and the Ebro Observatory have signed a collaboration agreement for the maintenance of several seismic stations and for the digitization of part of the historical collection related to the seismology of the latter institution. 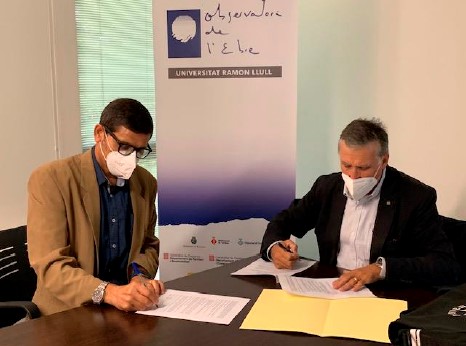 Thus, both entities will collaborate to maintain the seismic stations EBR (Ebro), ALCN (Alcanar) and ALCX (Alcalà de Xivert) and facilitate the exchange and dissemination of data. Work will also be done to digitize seismograms - earthquake recordings - made with analogue technology and seismological bulletins from the Observatory’s documentary collection. The aim is to bring high-value scientific information closer to scholars in these disciplines and preserve historical knowledge.

It should be borne in mind that the Ebro Observatory, a university institute of Ramon Llull University, is a non-profit foundation dedicated to the study of geophysical phenomena created in 1904, with a long tradition in seismological observation and of other geophysical parameters, which has accumulated a large documentary fund.

The agreement signed is now part of the line of collaboration that the ICGC and the Observatory have maintained for years. As a result of this collaboration, for example, it was possible to recover the record of the seismic station of the Observatory, the oldest in Catalonia, which interrupted the activity a few years ago due to technical problems. Very similar to what happens in climate studies, keeping a continuous record in one place allows you to compare the similarities and differences of earthquakes that have occurred in any part of the world and thus deepen your knowledge.

The Board of Trustees of the Observatory is made up of the town councils of Roquetes and Tortosa, the State Meteorological Agency (AEMET), the Upper Council of Scientific Research (CSIC), the Tarragona Province, the National Geographic Institute, the Ministries of Business and Knowldege and Territory and Sustainability of the Catalan Government, and the Meteorological Service of Catalonia (SMC).