Internal processes in the Sun can lead to violent phenomena such as solar flares and coronal mass ejections, expelling huge amounts of energy into interplanetary space in the form of electromagnetic and particle radiation travelling within the solar wind. The probability that such bursts impact the Earth is non-negligible, in which case they can trigger diverse phenomena commonly known as Space Weather events. Thus, the current systems of our magnetosphere and ionosphere will generally undergo dramatic variations, giving rise to magnetic fields that will eventually reach the surface, where numerous technological systems are deployed. The conductivity of the subsoil will determine the induced geoelectric fields that will be mapped along terrestrial conductors such as power networks, railways, or oil and gas pipelines. The geomagnetically induced currents (GIC) thus generated are potentially dangerous and can cause multiple adverse socioeconomic impacts. 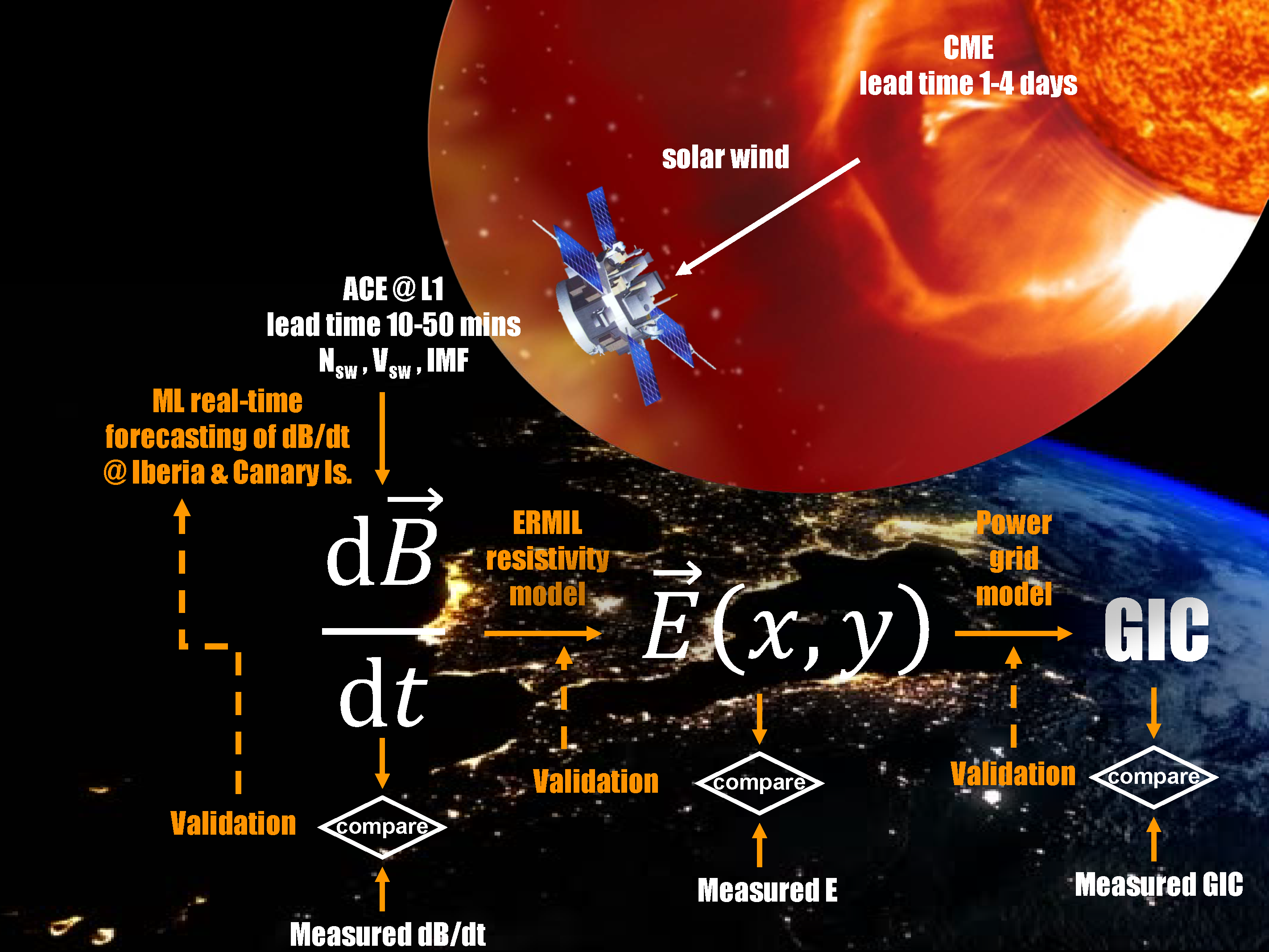 The objective of the coordinated project is to develop tools to advance preparedness against such phenomena. This will be carried out on several fronts, such as the prediction of magnetic variations on the Earth's surface (the key magnitude thatgives rise to GIC) based on satellite measurements of the solar wind parameters, and the assessment of the vulnerability of the Spanish power network to GIC, thus providing useful products that enable the power grid operators to mitigate their effects.

As experts in Space Weather, the Ebro Observatory (OE) team will provide the surface magnetic field to the Instituto de Física Corpuscular group, in order to train Deep Learning techniques with predictive purposes; OE will guide them in the selection of solar wind parameters used as input; and will jointly supervise the output. Once this output is deemed satisfactory, the predicted results will be convolved with the earth resistivity models provided by the University of Barcelona group, thus obtaining the geoelectric field. This quantity will then be input into the model of the Spanish power network developed by the OE group (which in turn will be updated and extended with respect to their previous project) in order to have a quasi-real time estimate of the expected GIC impact. New vulnerability maps will be generated based on the updated information of the power grid. At the same time, the OE group will continue to maintain, upgrade and extend the network of differential magnetometry points for indirect measurement of GIC under power transmission lines, aimed at validating both its power grid model and the ground resistivity models. OE will also implement direct GIC measurements in the neutrals of certain network transformers and will use continuous measurements of the geoelectric field at the San Pablo de los Montes Observatory to validate the predictions of this variable. Finally, OE will carry out a study of the return period of extreme Space Weather events, closely related to the occurrence of GIC. The contribution to the understanding of this natural threat, as well as the transfer of the results to the stakeholders and their dissemination to society, will generate a real and well-founded appreciation of its vulnerability and will enable appropriate measures to be taken on a solid basis.