An international research team from the GFZ Helmholtz Centre in Potsdam, in collaboration with scientists from research centers in Italy, Spain and the United States, including the researcher from the Ebro Observatory (URL - CSIC) Estefania Blanch, has published a new study on seismicity induced at the Castor gas storage facility in the journal Nature Communications. 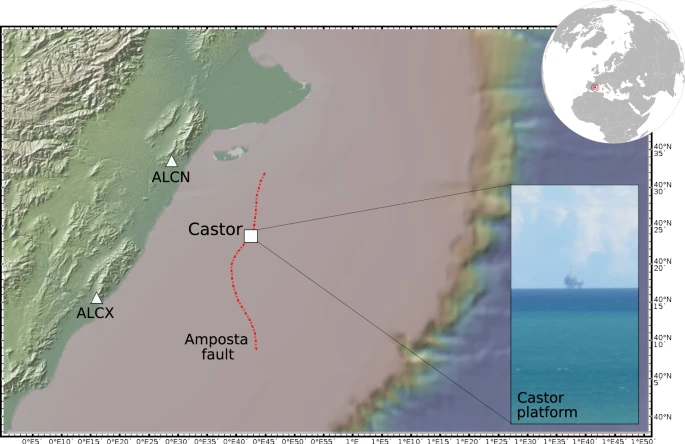 The study focuses on the 2013 seismic sequence at the Castor platform, about 20 km off the coast of the Valencian Community, Spain. In the initial phase of gas storage development, thousands of earthquakes, with magnitude up to 4.1, occurred due to gas injection. While similar gas storage operations around the world do not usually stimulate substantial seismicity, the Castor sequence remains to date the most significant case of seismicity related to this type of industrial operation in Europe. Through a combination of advanced seismological techniques and seismological data collection, this study helps to reconstruct the seismogenic processes and the geometry of the activated fault, which have been the subject of dispute to date.

This study identifies about 3,500 earthquakes at shallow depth between September and October 2013, in the vicinity of the Castor injection platform, and reconstructs for the first time three phases of the seismic crisis. The first phase, which accompanies gas injection from the beginning to mid-September, is characterized by moderate seismicity, with a progressive increase in magnitude. The end of the gas injection marks the beginning of the second phase, which extends until the end of September. During this phase, seismicity migrates slowly to the southwest, due to the process of pore pressure diffusion. The third phase extends until the first days of October, characterized by a rapid migration in the opposite direction, towards the northeast. The occurrence of all major earthquakes in this phase is the consequence of asperity rupture. The seismicity mainly affects a secondary fault, located below the natural reservoir, with a dip opposite to that of the main fault, which acts as the roof of the reservoir.

This study demonstrates how it is possible to reconstruct in detail the dynamics of an induced seismic sequence, despite the lack of a dense monitoring network, and provides an example for similar studies elsewhere.

The results of this paper are also important, considering that the Castor project has been abandoned after the occurrence of the earthquakes, and for the estimation of risks and responsibilities in this type of seismic events, which are of public interest and debate.

Nature Communications is a multi-disciplinary, open-access, online-only journal which publishes articles from all fields of natural sciences. Part of its scope is to fill a gap for high-quality, cross-disciplinary research articles whose topic does not have a dedicated Nature-branded journal. According to the Journal Citation Reports, the journal has a 2020 impact factor of 14.

The Ebro Observatory Foundation is attached to the Department of the Vice-Presidency and Digital Policies and Territory of the Generalitat de Catalunya. Its board of trustees, chaired by this department, is formed by the municipalities of Roquetes and Tortosa, the State Meteorological Agency (AEMET), the Spanish National Research Council (CSIC), the Tarragona Provincial Council, the National Geographic Institute, the Department of Universities and Research of the Government of Catalonia, the Meteorological Service of Catalonia (SMC) and the Cartographic and Geological Institute of Catalonia (ICGC). The Ebro Observatory is a university institute of the Ramon Llull University.