The earth's magnetic field is generated by an internal molten layer in the Earth. This layer, rich in iron and nickel, constitutes the outer core, whose dynamics (the so-called geodynamo) causes the field. Broadly speaking, it could be approximated by a magnetic dipole tilted some 10 degrees from the axis of rotation of the Earth and slightly displaced from its center. This internal field does not remain invariant in time or in space. Its poles move several hundred kilometers a year, and it also varies in intensity and polarity, being reversals relatively frequent in the geological past. Although it was established that the magnetic N Pole was the one near the geographic N Pole, later it was found that it was not. The field lines of the Earth's dipole come from the South and enter the North, so strictly, a compass points the magnetic south (located near the geographical N Pole at present), but the original nomenclature has prevailed. 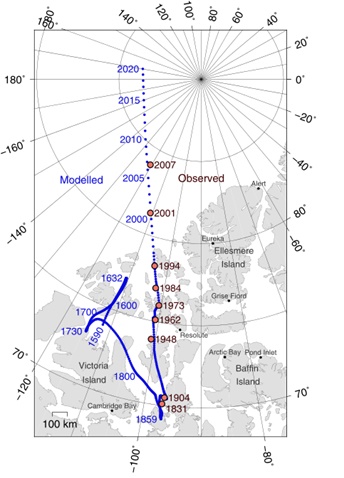 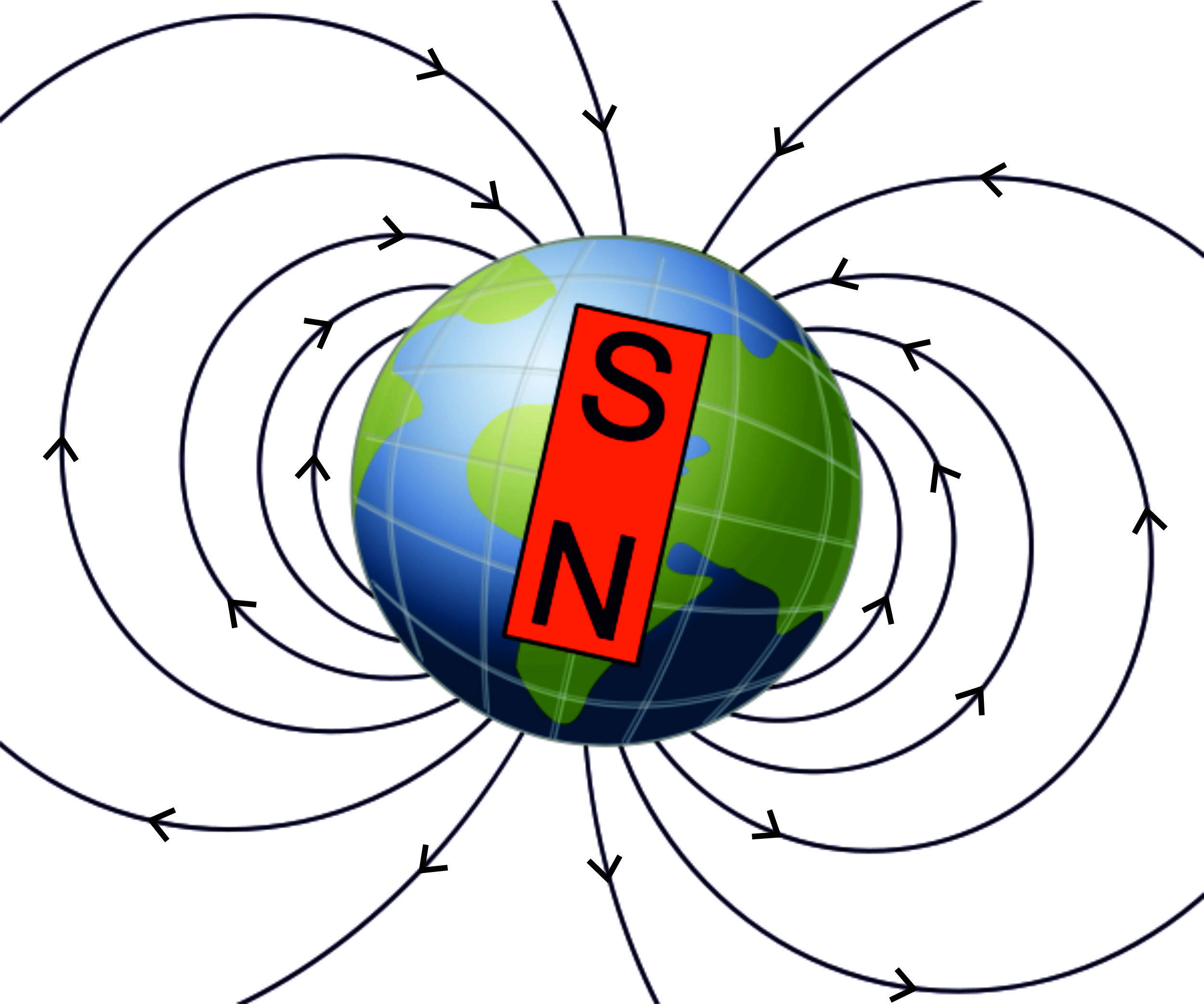 Left: observed and modelled drift of the magnetic North Pole. Top: actual position of the dipole, where the field lines enter the geographic N (South of the magnetic dipole which approximates the geomagnetic field) and vice versa.

The field generated within the Earth has a number of observable variations in scales of months and years, known as the secular variation, such as the drift of the magnetic poles. However, when geomagnetic measurements started, a series of daily variations were observed which could not be attributed to the internal field. These daily fluctuations are actually part of the so-called external field, which is much weaker, but has interesting consequences. A series of magnetic disturbances are detected and studied in different geomagnetic observatories in the world. Its sources are diverse: a system of electrical currents in the ionosphere due to the ionization produced by the Sun in the conductive layer of the atmosphere, the solar wind interaction with the magnetosphere (the region where the geomagnetic field is confined, which protects us from the solar wind) and the ionosphere itself, together with the conductive nature of the earth's crust and mantle. The knowledge of these variations over time allows a better modeling of the geomagnetic field behavior, and is a fundamental tool in disciplines recently created as space weather, whose relevance is increasing gradually.

Animation showing how the magnetosphere is deformed when hitting the solar wind on it. As it can be seen, there are two areas in the North and in the South where the geomagnetic field is weaker, so that the solar wind can penetrate more easily. As a result of the interaction of these charged particles from the Sun with the atmosphere, auroras borealis and australis are generated.

terrestrial magnetism is the management of the Ebro geomagnetic observatory. On the other hand, through the granting of various projects of the National Antarctic Research Program, the Ebro Observatory also installed and operates the Livingston Island Observatory, in Antarctica. These two stations are part of the global network of geomagnetic observatories and contribute to the development of models such as the International Geomagnetic Reference Field (IGRF) and other studies of various kinds, such as those dealing with the Sun-Earth relationship, framed within the modern discipline known as Space Weather.

The main objective of a geomagnetic observatory is to determine the temporal evolution of the Earth's magnetic field vector at the point where it is located. Data from observatories reveal the magnetic field variations in a wide range of time scales, from seconds to centuries, and this is important for understanding processes both inside and outside the Earth. 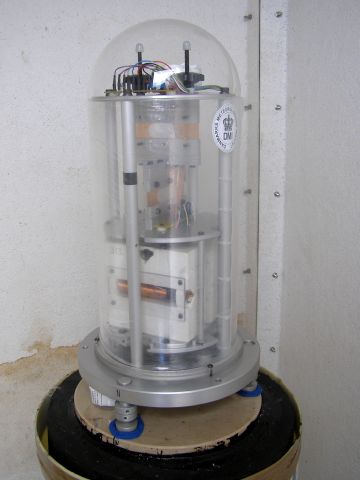 The records of the Ebro geomagnetic observatory, at Roquetes (40.8 °N, 0.5 °E), have more than 100 years of history. They are kept since 1910, except for the period covering April 1938 to December 1941. The data were collected in analog format until 2000 and in digital format since. However, many of the classic records of the three magnetic field elements have been digitized using a system developed at the Centre. Disturbances due to railway electrification reaching the city of Tortosa forced us to place a few years ago another variometric station in the town of Horta de Sant Joan (41.0 °N, 0.3 °E), at the foot of the mountain of Santa Barbara, in the Sant Onofre chapel, near the convent of San Salvador. This is done in collaboration with the Instituto Geográfico Nacional. Currently, the observatory has a FGE Fluxgate Magnetometer with suspended sensor (manufactured by the Danish Meteorological Institute) and a GSM19 proton precession magnetometer in Horta, and a magnetometer Geomag M390, also equipped with an Overhauser effect magnetometer GSM90 in Roquetes. The recording equipment of this latter station is completed by a proton vector magnetometer (dIdD equipment) designed by the British Geological Survey. The absolute observing program is done on a daily basis with a declinometer-inclinometer (DI-flux) Zeiss 010B with an 810 Elsec fluxgate probe. Observatory data are referred to a single point on the main pillar of observations which, since Januray 1, 2012, is that of Horta de Sant Joan, remaining those of Ebro as a backup station. The Ebro Observatory is an INTERMAGNET magnetic observatory, sending data daily to the Edinburgh GIN.

The Livingston Island geomagnetic observatory (62.7 °S, 60.4 °W) is located in the Spanish Antarctic Base Juan Carlos I, in the South Shetlands, north of the Antarctic Peninsula. Its installation took place during 1995-1996 and 1996-1997 Antarctic Surveys and it has records since December 1996. This is an observatory manned during the austral summer months, typically from November to February, being in automatic operation without human intervention the rest of the year. In terms of measuring instruments, currently it has three variometric magnetometers: a proton vector magnetometer in dIdD configuration (BGS), an FGE triaxial fluxgate magnetometer (DMI), and a GEM Systems scalar magnetometer. As for absolute instruments, it has a DI-flux with Carl Zeiss THEO 015B theodolite and 810 Elsec Fluxgate probe and another GEM Systems proton magnetometer.

In both cases, the instrumentation allows to sample the magnetic field a 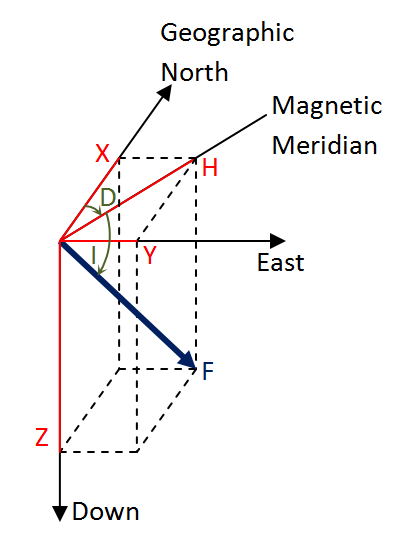 ccurately at a rate of once per second. The way the magnetic field measurements is expressed depends on the coordinate system used to characterize this vector. The two most commonly used coordinate systems are Cartesian and cylindrical. Thus, one can measure the components X, Y and Z in a geographic reference system, or equivalently, the elements H (intensity horizontal), D (declination) and Z (vertical intensity). The total intensity (F) and the inclination (I) are also often given.